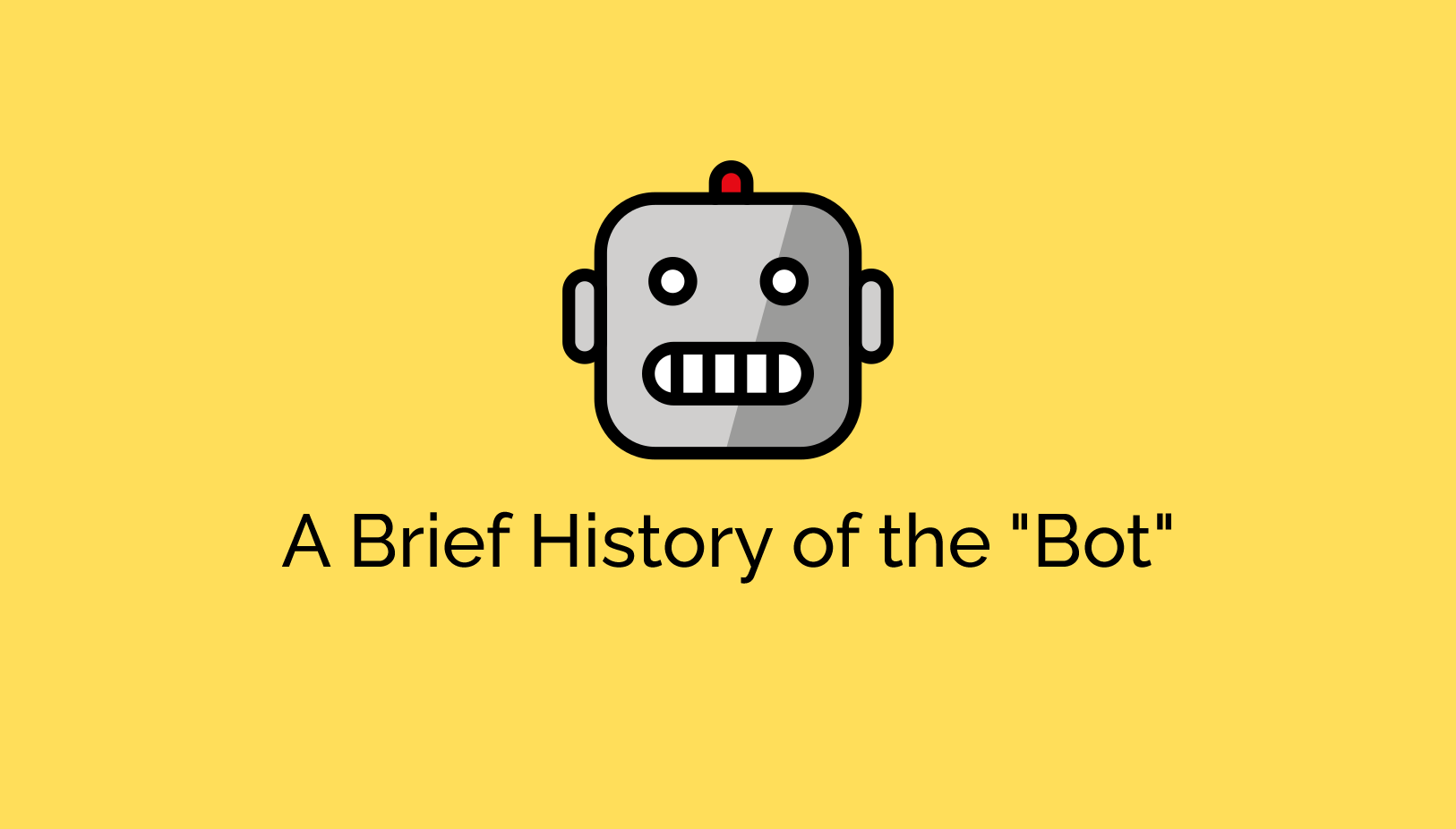 When Internet Relay Chat (IRC) was developed and first initiated by Jarkko Oikarinen to take the place of the MultiUser Talk (MUT) program utilised by Finland’s University of Oulu in the late 1980’s, nobody realised the extent in which it would grow.

There is no definitive answer as to when IRC began incorporating the use of the ChatBot but a section was rumoured to have been created in 1992 to begin investigating the use of AI Bots on the medium. In 1994, Joseph Weizenbaum of MIT in Massachusetts developed “ELIZA”, who designed to recognise key words and phrases in text to generate open-ended questions in response. The development of “ELIZA” is generally considered to have instigated the word “ChatterBot”, although “ELIZA” itself was never utilised on IRC.

The first IRC Bots are generally recognised as being Jyrki Alakuijala’s “Puppe”, Greg Lindahl’s “Game Manager” and Bill Wisner’s “Bartender” which all surfaced on IRC in the early to mid 1990’s and were designed to maintain a presence in otherwise-empty channels while also being able to provide basic automated responses when required to.

By 1998 Bots on IRC were more of a rule than an exception, with most channels using them, which encouraged continued development of their capabilities and also, on occasion, a more sinister side to their design. The Worm, “Pretty Park”, is known as one of the original malicious Bots on IRC, purely designed to infiltrate users’ computers and attack them. Although certain readers might wonder about the initial omission of mentioning the infamous Trojan “Sub7” here, it is worthwhile remembering that this was actually a malicious .EXE file that was sent over IRC to infect computers and not actually a Bot. Its mention now does, however, remind us that Bots weren’t the only means of inflicting harm in those early days of Internet Relay Chat.

“Gtbot” made its first appearance on IRC in 2000 as a fake mIRC client program responsible for some of the first denial of service attacks. “Gtbot” and similar others served as inspiration for many attacks prevalent outside of IRC today, such as ransomware and information theft.

Outside of IRC, Bots were also becoming more of a presence. In 1994 “Webcrawler” was created to index web pages, first being used by AOL in 1995 and later by Excite in 1997. In 1996 “Backrub” was utilised for the same reason, later experiencing a name change and becoming the most famous Bot used for this function – “GoogleBot”.

“A.L.I.C.E.” (Artificial Linguistic Internet Computer Entity), later known as “ALICEBot” or simply “ALICE”, was initially devised by Richard Wallace in 1995 with its inspiration coming from Weizenbaum’s “ELIZA”. In 1998, “ALICE” was rewritten in Java, using an XML Schema called AIML (Artificial Intelligence Markup Language) for specifying heuristic conversation rules. Mention has been made by Spike Jonze of “ALICE” being the inspiration for his 2013 Academy Award-winning film, “Her”, starring Joaquin Phoenix.

“ALICE” is now an open-source Bot, with hundreds of contributors having created hundreds of thousands of lines of AIML to introduce into conversation, hence allowing “ALICE” to replicate a person in general terms rather than being limited to therapist-type responses like “ELIZA” before it.

“Storm” first made an appearance in 2007. It is estimated that this Botnet has infected in the region of 50,000,000 computers and been involved in crimes including identity theft and stock price fraud.

2011 marked the advent of “Siri”, Apple Inc’s virtual assistant that makes use of voice queries, gesture-based control, focus tracking and a natural-language user interface to make recommendations, answer questions and perform actions by assigning requests to various internet services. Followed within a few years by Amazon’s “Alexa” and Microsoft’s “Cortana”, “Siri” has faced criticism for a lack of innovation since its introduction, needing improvements in recognising English spoken with an accent, while too often getting questions wrong and, instead of answering, showing a website result instead. This
criticism prompted Apple to build a new AI service, called “Viv”, in 2017.

The most notable recent development in AI Bot technology (we’d like to think), takes the form of ContentBot. Being utilised more and more frequently on websites, ContentBot provides the user with the important service of generating copy for use in business, marketing, writing and a variety of other vocations. With the input of carefully-considered and researched content blocks, ContentBot is designed to draw topical and up-to-date information from the internet and generate responses to given questions within seconds. This technology is designed to save the user time and creative effort, enabling an upsurge in sustainable productivity. ContentBot is also being utilised to create short content for platforms like Twitter, indicating its effectiveness as a modern web tool and highlighting the importance of well-investigated content blocks and topics by developers.

Whatever your thoughts on modern technology, it cannot be denied that the “Bot” has played an integral and sustained part in assisting computer developers (and now copywriters) in changing the face of the world as we’ve known it, and users in reaping the rewards of the Artificially-intelligent progressions made in online technologies, whilst also enforcing the need to be more security conscious as well. We wait in anticipation to see in which direction the “bot” will take us next.