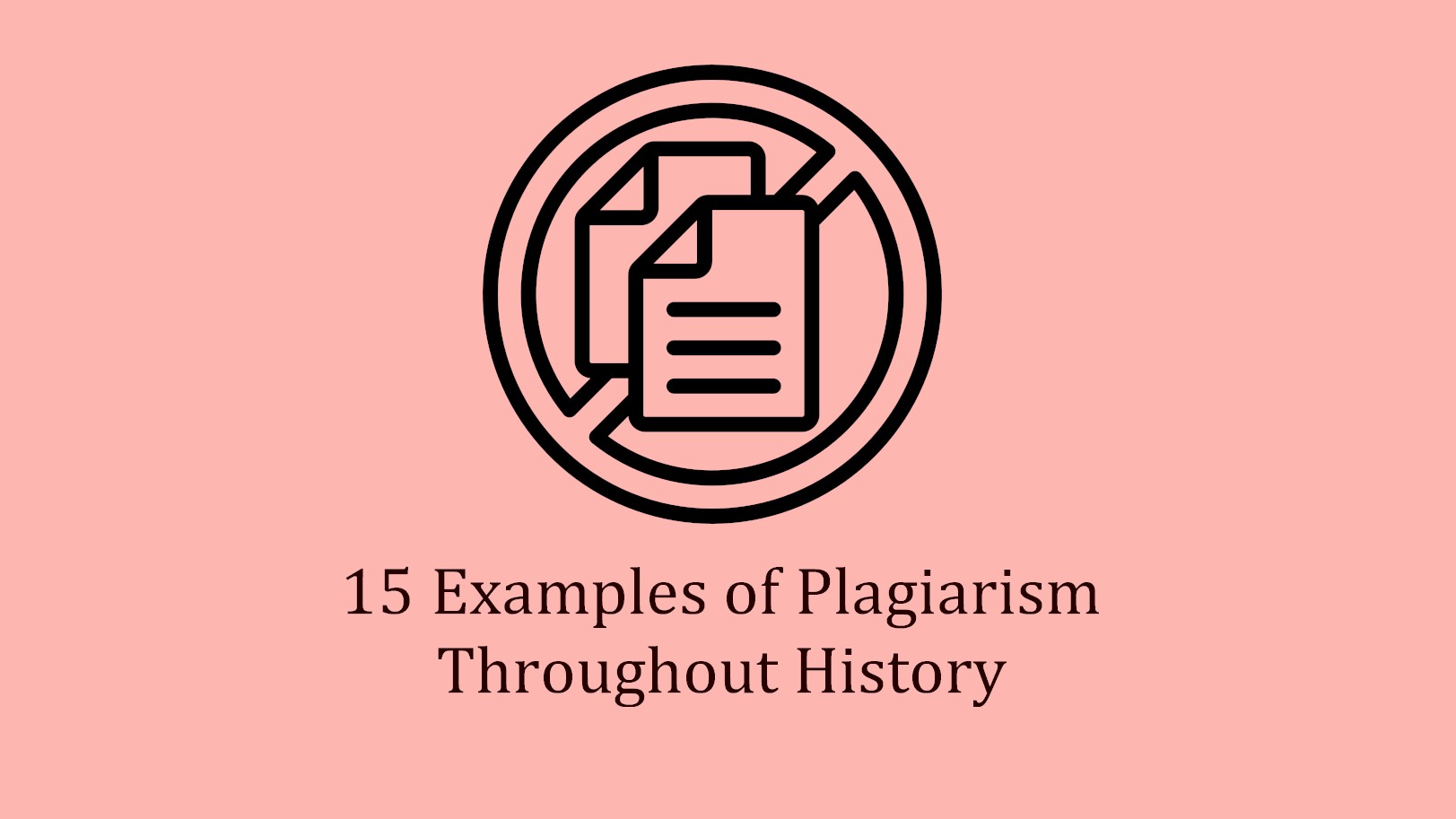 Plagiarism has been around since a few decades after the death of Christ. In modern times it is unlikely to disappear either. The wealth of information online encourages those looking for instant gratification instead of generating their own original words of substance. What follows are 15 examples of plagiarism throughout history:-

The first recorded instance of plagiarism goes back to the year 80 AD. Martial was a Roman poet. He became aware that a fellow poet, Fidentinus, was making a habit of taking his poems and reciting them as his own. Although it was common for poets to recite the works of other poets, credit was still expected when it was due. Fidentinus was not doing this. On hearing about this wilful transgression, Martial did all he could do in this pre-copyright era. He wrote a series of poems about Fidentinus, publicly outing his rival bard as a “plagiarus”, or kidnapper, seducer and plunderer.

Leonardo Da Vinci’s famous “Vitruvian Man” dates back to 1490. Research carried out in the early 21st century by Claudio Sgarbi, an Italian historian, has raised questions about its originality. The research seems to prove that “Vitruvian Man” is a copy of a drawing done by a friend of Da Vinci’s, architect Giacomo Andrea de Ferrera.

The famous William Shakespeare himself was not spared when it comes to plagiarism. LaFayette College professor June Schlueter, and independent scholar Dennis McCarthy, used anti-plagiarism software to find similarities between portions of the famous playwright’s works MacBeth, King Lear, Henry VI, and Richard III and those of unheralded scribe George North, in his 1576 unpublished manuscript “A Brief Discourse of Rebellion”.

English writer Samuel Johnson included “plagiarism” as a word in his 1755 dictionary, “A Dictionary of the English Language”. The definition “a thief in literature; one who steals the thoughts or writings of another.” seem quite ironic – Johnson’s dictionary borrowed numerous definitions from preceding dictionaries.

The Statute of Anne

James Platt Jr. was an English philologist in Anglo-Saxon studies who fell foul to plagiarism in the early 1880s. Scholars Pieter Jacob Cosijn and Eduard Sievers accused him of using their historical linguistic information without accreditation. To make matters worse, he was also accused by well-known philologist, Henry Sweet. In 1883, Sweet wrote a letter to Cosijn warning him of Platt’s plagiarism.

He wrote: “Dear Sir, I feel it is my duty to give you some words of warning about a countryman of mine, Mr. J. Platt. He is in the habit of introducing himself to scholars as a friend of mine, extracting information from them, and then publishing it as his own without a word of acknowledgment.” Platt received “a severe vote of censure” from the Philological Society as a result of his actions.

Rudyard Kipling was an Indian-born author famous for many short stories and novels. He admitted to plagiarising portions of his famous story, 1894’s “The Jungle Book”. In a one page, signed letter from around 1895 he writes, “In fact, it is extremely possible that I have helped myself promiscuously but at present cannot remember from whose stories I have stolen.”

American author and disability rights advocate Helen Keller penned a story called “The Frost King” in the early 1900s. She was still a preeteen when she sent the story to a Mr. Anagnos at the Perkins Institution. It was soon discovered that Keller’s story bore a distinct similarity to another, “The Frost Fairies”, written by Margaret T. Canby. Keller was accused of plagiarism, which she denied. It emerged that she possibly wrote the story after her minder, Miss Sullivan, narrated a tale based on the original.

In the early 1930s, a young mathematician named John von Neumann proved the “mean ergodic theorem”. After sending the proof to the Proceedings of the National Academy of Sciences, senior mathematician G. D. Birkhoff reviewed it. He recommended publication, with publishing occurring in 1932. Before the publication, Birkhoff improved on von Neumann’s result, calling it the “pointwise ergodic theorem”. Birkhoff’s theorem saw publication a year earlier than von Neumann’s, with no mention made of the original. Only many years later did Birkhoff admit that von Neumann had the priority.

During the 1950s a certain future civil rights leader attended, and graduated from, Boston University. This man was Dr. Martin Luther King, Jr. Years after his graduation and later assassination, claims surfaced that Dr. King plagiarised certain parts of his doctoral thesis. Identified portions were taken from the dissertation of a previous student Jack Boozer, with others taken from the works of Paul Tillich (the thesis subject). To add more fuel, large portions of Dr. King’s famous 1963 “I have a dream” speech bore more than a vague resemblance to another speech. Archibald Carey, Jr. had delivered a similar monologue at the Republican National Convention in 1952.

In 1976, the US District Court in Manhattan ruled that ex-Beatle George Harrison had committed plagiarism. His iconic “My Sweet Lord” song had the same tune and melody as a 1962 John Mack tune, “He’s So Fine”, made famous by girl group The Chiffons. Judge Richard Owen deemed “My Sweet Lord”, to be “the very same song as ‘He’s So Fine’ “. He stated: “This is, under the law, infringement of copyright and is no less so even though subconsciously accomplished.”

Prolific American novelist Nora Roberts was the victim of “mind rape” in 1997. A vigilant reader noticed parallels between her 1988 book, “Sweet Revenge” and another novel. In a blog post she identified “Notorious”, by American author Janet Dailey as the other book. This drew an admission of plagiarism from Dailey, who confessed to using story elements and details from Roberts in three of her books.

Dan Brown’s “The Da Vinci Code” had already withstood two legal battles when suspected plagiarism examples surfaced in 2006. Brown was accused of using an exact passage found in robotics scholar Mark Rosheim’s paper, “Leonardo’s Lost Robot”. Courts quashed another accusation of plagiarism brought by US writer Lewis Perdue against Brown and “The Da Vinci Code” in the same year. Further accusations of plagiarism against Brown surfaced. Fellow author Jack Dunn, in 2017, believed that the bestselling novel bore many plot and scene similarities to his 1997 book, “The Vatican Boys”.

During the last decade, The Washington Post discovered a variety of copied content in leading primatologist Jane Goodall’s book “Seeds of Hope: Wisdom and Wonder From the World of Plants”. This included content from Wikipedia and other websites. Neither Goodall nor co-author Gail Hudson provided any accreditation. After the plagiarism went public, Goodall blamed her “chaotic method of note taking” for the reference oversights. She promised to correct them all in the upcoming 2nd edition.

I’ve saved one of the worst cases of plagiarism for last. In 2019, author Courtney Milan exposed Brazilian novelist Cristiane Serruya as a plagiarist. Milan recognised her own work in a Serruya novel, revealing the fact on her blog. This prompted many other authors to discover and reveal similar violations of their work. During her seven year, 30 novel writing career, Serruya had claimed the work of multiple other authors as her own. She finally broke her silence, choosing to blame a ghost writer for the copyright gaffes. This only worsened matters, creating a social media storm. The serial plagiarist has not “written” another book since.

It is evident that plagiarism is committed in numerous ways. Sometimes it’s intentionally done, or it can be accidental. The bottom line is that plagiarising another’s work can be detrimental and damaging to both careers and reputations.

With the advent of the internet, plagiarism has become more common. Through novels and writing, songwriting, speeches, education, and in blogs and on websites, cases of plagiarism seem to be surging. Perhaps these previous statements are inaccurate though? Maybe it has always been this common but is now just being identified more often?

A good way to ensure that you are not plagiarising content is to make use of a good plagiarism or uniqueness checker, such as the one you can find at ContentBot.

This is a very handy tool for those who use various sources to compile their articles. It highlights stanzas and sentences that may already appear elsewhere on the web, even from websites that may not have been utilized to gather your information. Nobody wants to plagiarise, or even be accused of doing so. The ContentBot Plagiarism/Uniqueness Checker will ensure that, simply by pasting your article in the provided block and clicking “check copy”, the chance of any plagiarised content is eliminated. The feature also provides sources of where the identified original content is located.

I hope that these 15 examples of plagiarism throughout history provide some insight into how easy it is to be accused of plagiarism, even at times when motives have been quite innocent. It is up to you, the scribe, to ensure that you’ve conducted suitable checking of your copy or content and that you won’t be opened up to any accusations. Always avoid being a potential copycat!

2 thoughts on “Copycat: 15 Examples of Plagiarism Throughout History”