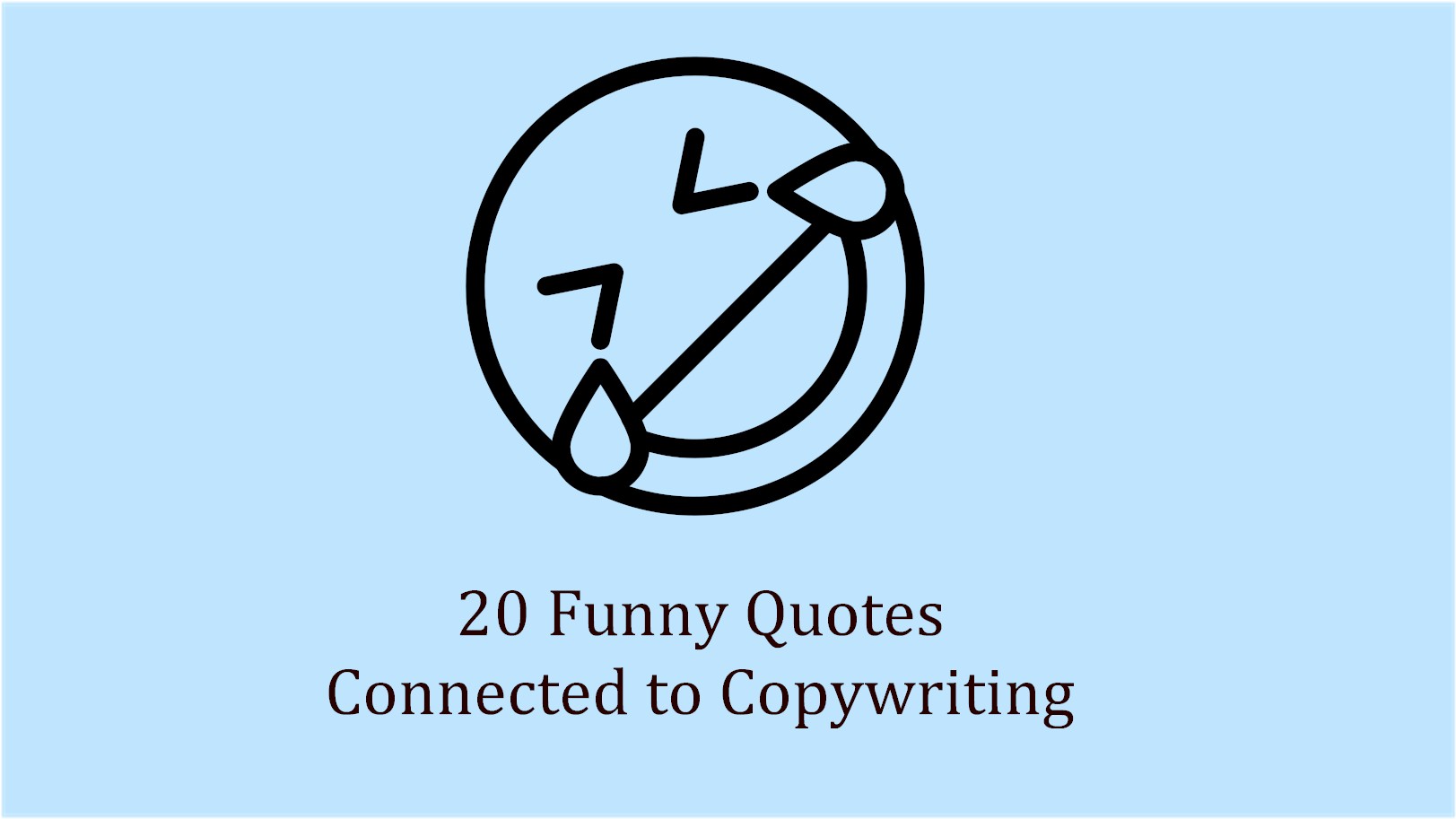 Quotes can keep you smiling while still touching a nerve with the truth. Here are 20 funny quotes connected to copywriting:-

You may have been born with a flair for the written word, and an artistic and creative mind. It’s no wonder you want to write. Copywriting may serve a purpose until you are able to write a novel and become famous, or it may be your life’s calling. Either way, you are a writer, so go for it!

Baroness Ruth Rendell was an acclaimed English fiction author of psychological murder mysteries and thrillers. She had previously worked as a feature writer and news writer in the UK.

02. “Writing is easy. All you do is stare at a blank sheet of paper until drops of blood form on your forehead.” – Gene Fowler

You’re probably well aware of the perils of writer’s block. What writer isn’t? How you deal with it depends on you. Fortunately there are now writing tools like AI content generators to assist you with periods where your creativity wanes.

Gene Fowler was an American dramatist, journalist and author. He wrote 17 fiction and non-fiction books along with a number of screenplays.

03. “Real seriousness in regard to writing is one of two absolute necessities. The other, unfortunately, is talent.” – Ernest Hemingway

Writing is a talent. Being a good copywriter requires a great deal of that talent, along with understanding, patience and persistence, not to mention research ability. It is, indeed, a serious business.

Ernest Hemingway was an American novelist, journalist and short story writer, while also being an avid sportsman in his youth. He was renowned for works like “A Farewell to Arms” and “The Old Man and the Sea”.

Your copywriting efforts require hours of sitting in front of a computer screen. This, in itself, requires tonnes of dedication and endurance. Don’t be afraid to take regular breaks though. It’ll do your brain, and the seat of your pants, the world of good!

Mary Heaton Vorse was an American journalist, activist, novelist and social critic. She wrote for the New York Post, among others, and was known for writing numerous ghost stories.

06. “The world is a hellish place, and bad writing is destroying the quality of our suffering.” – Tom Waits

As a copywriter, you are, no doubt, subjected to writing that makes you want to pull your hair out. It’s tolerable if you’re in a position to correct it but when you’re seeing it in newspapers, on blogs and in advertisements that you can’t change, it does cause mental anguish, suffering and a whole lot of face-palming, doesn’t it?

Tom Waits is an American musician, songwriter and actor who wrote “Downtown Train” and “Jersey Girl”, whilst also acting in films including “Bram Stoker’s Dracula” and “The Book of Eli”.

07. “Let me see if I can put it in words that even the inebriated might understand.” – Tom Robbins

Keep your writing simple, especially if your content is technically-minded or educational. Always remember that what you may understand is not necessarily always understood by your audience, unless they are niche-based like programmers or professors.

Tom Robbins is an American novelist synonymous with his 1976 book “Even Cowgirls Get the Blues”.  In 2000, he was named one of the “100 Best Writers of the 20th Century” by Writer’s Digest magazine.

Get your spelling right. There is nothing that impresses a pedantic audience less than a copywriter who can’t spell. It happens more often than you think and it’s truly unforgivable from people who calls themselves “professional”. There are numerous spell checkers available, and even Google can help if you insert a word there. There’s really no excuse.

Dave Barry is an American humour author and columnist. He has written over 15 fiction novels and a number of non-fiction books, and won the Pulitzer Prize for Commentary in 1988.

09. “From now on, ending a sentence with a preposition is something up with which I will not put.” – Winston Churchill

The correct use of grammar in your copy is vitally important, especially in business copy. There are times when playing with sentences in an unorthodox manner can enhance copy for the right audience but, generally, stick to language as it’s meant to be.

Sir Winston Churchill was prime minister of England during World War II. Prior to entering politics he was a journalist for the Morning Post, and covered the Anglo-Boer War in South Africa.

10. “Never, ever use repetitive redundancies. Don’t use no double negatives. Proofread carefully to see if you any words out.” – William Safire

Once again, the importance of correct grammar can not be emphasised enough. Keep to the straight and narrow unless, like Safire, you’re making a point to stand out.

11. “Writing is a socially acceptable form of getting naked in public.” – Paulo Coelho

Sometimes you have to bare your soul in your copy or content. Emotional bonds with your audience depend on your ability to show your empathy and, in order to do this, you have to occasionally ‘get naked’.

Paulo Coelho is a Brazilian novelist and lyricist, known best for his novel “The Alchemist”. He has written lyrics for music artists including Elis Regina and Rita Lee.

12. “There’s not much to be said about the period except that most writers don’t reach it soon enough.” – William Zinsser

Copywriters need to be concise and to the point in their writing. Especially in the digital era, audiences appreciate short, sharp sentences when reading and anything that’s too long-winded will result in it being passed by. Use your periods or full stops regularly and your content will be appreciated more.

William Zinsser was an American writer, teacher, editor and literary critic. He began his career as a journalist for the New York Times Herald and remained a regular contributor to a number of publications during his professional life.

13. “Only kings, presidents, editors, and people with tapeworms have the right to use the editorial “we.”” – Mark Twain

Make your copy personal. Write from yourself to a single persona representing your target audience. ‘We’ should remain ‘I’ unless specifically required by your client or company.

14. “It is perfectly okay to write garbage – as long as you edit brilliantly.” – C.J. Cherryh

Write your first drafts as you think of them and feel them. Get your ideas down ‘on paper’ so that they don’t pass you by and don’t worry too much about how good they are. Once you’re done, begin revising and editing. This is one reason why copywriters nowadays make use of AI content generators – it doesn’t matter what your typed or generated first draft looks like as, by the time you’ve finished editing, it’ll look brilliant.

C.J. Cherryh is a prolific American speculative fiction writer. She has written over 80 books since the 1970s, including the Hugo Award-winning novels “Downbelow Station” and “Cyteen”.

15. “Revising a story down to the bare essentials is always a little like murdering children, but it must be done.” – Stephen King

There are days when you sit down in front of your computer and just write and write. When you finally break you realise that you’ve written way too much content. Revising your content can be painstaking, especially if you’ve really enjoyed writing it. It’s part of the job though – sometimes you have to hit the ‘delete’ key on too much of your excellent text but it’s part of the job. Word quotas need to be kept.

Stephen King is an American author of horror, supernatural, thriller and suspense titles, to name but a few. With too many recognisable titles to name, he is a multi-award winning writer also responsible for the acclaimed non fiction book, 2000’s “On Writing”.

16. “The beautiful part of writing is that you don’t have to get it right the first time… unlike, say, a brain surgeon.” – Robert Cormier

That’s the joy about copywriting, isn’t it? You have the ability to change your copy if you find an error or think of an additional valid or striking point. Perfect your proofreading and editing skills as the opportunity to improve on your initial copy is always there. Unless you’re struggling to make a deadline, of course.

Robert Cormier was an American author and journalist. His natural pessimism transferred well into print, resulting in popular works including “I Am the Cheese” and “All Fall Down”.

17. “Other than the physical act of putting pen to paper, I can’t think of another more important job duty of the writer than to stare wistfully out a window.” – Terri Guillemets

No, you’re not being lazy. Taking time from writing to do absolutely nothing is an incredible performance booster and creativity enhancer. You will find that breaking regularly will increase your productivity and not the opposite. You’re human, and a copywriter, so breaking will maintain any creative thoughts. You know when you need a break – your mind tells you – so take one!

Terri Guillemets is an American quotation anthologist who has been collecting quotes since she was thirteen years old. Her website, The Quote Garden, was created in 1998, making it one of the most long-standing online quote collections in the world.

18. “I realized I was officially a professional writer when all my plans began with “drink coffee” and ended with “take a nap”.” – Cassandra Duffy

Being a professional copywriter is hard work. You’re working even when you’re not working as your mind generally doesn’t stop. As a result, when you’re not at your desk writing, you’re likely to be holding your phone to make a voice note for when an idea might surface, or have a notepad and pen in your handbag or car’s cubbyhole. That cup of coffee, or six,… and your comfortable bed? Priceless!

Cassandra Duffy is an American lesbian fiction writer of novels and short stories. Her freelance sex advice column can be found in various magazines and dating websites.

19. “I love deadlines. I like the whooshing sound they make as they fly by.” – Douglas Adams

Deadlines are necessary evils in copywriting, and a reason why most successful copywriters have outstanding time management skills. Your ability to schedule tasks, juggle projects and keep your cool under pressure results in deadlines being met comfortably and seldom ‘whooshing’ by.

Douglas Adams was an English author, satirist, screenwriter, humourist and dramatist. He authored the famous “The Hitchhiker’s Guide to the Galaxy”. He was also responsible for selecting the 1994 album title for “The Division Bell” by the supergroup Pink Floyd.

20. “Unless a reviewer has the courage to give you unqualified praise, I say ignore the bastard.” – John Steinbeck

No matter what you’re writing, you’ll have to put up with assessments and reviews that are less than complimentary on occasion. People are all different and what may impress some won’t necessarily impress others. Suck it up and carry on. If you’re talented you’ll do a great job most of the time and yes, ignore the bad ones unless they’re coming from your client or boss. Those ones you’ll need to improve on.

John Steinbeck was an American author who gave the world the novels “East of Eden” and “The Grapes of Wrath”, along with the novella “Of Mice and Men”. He won the 1962 Nobel Prize for Literature.

I’ll stop there. Needless to say there have been some true ‘Pearls of Wisdom’ uttered over the years. They’re interesting to read and, if there’s a little humour involved too, can bring a smile to a face. I hope you’ve enjoyed these 20 funny quotes connected to copywriting. Keep smiling!