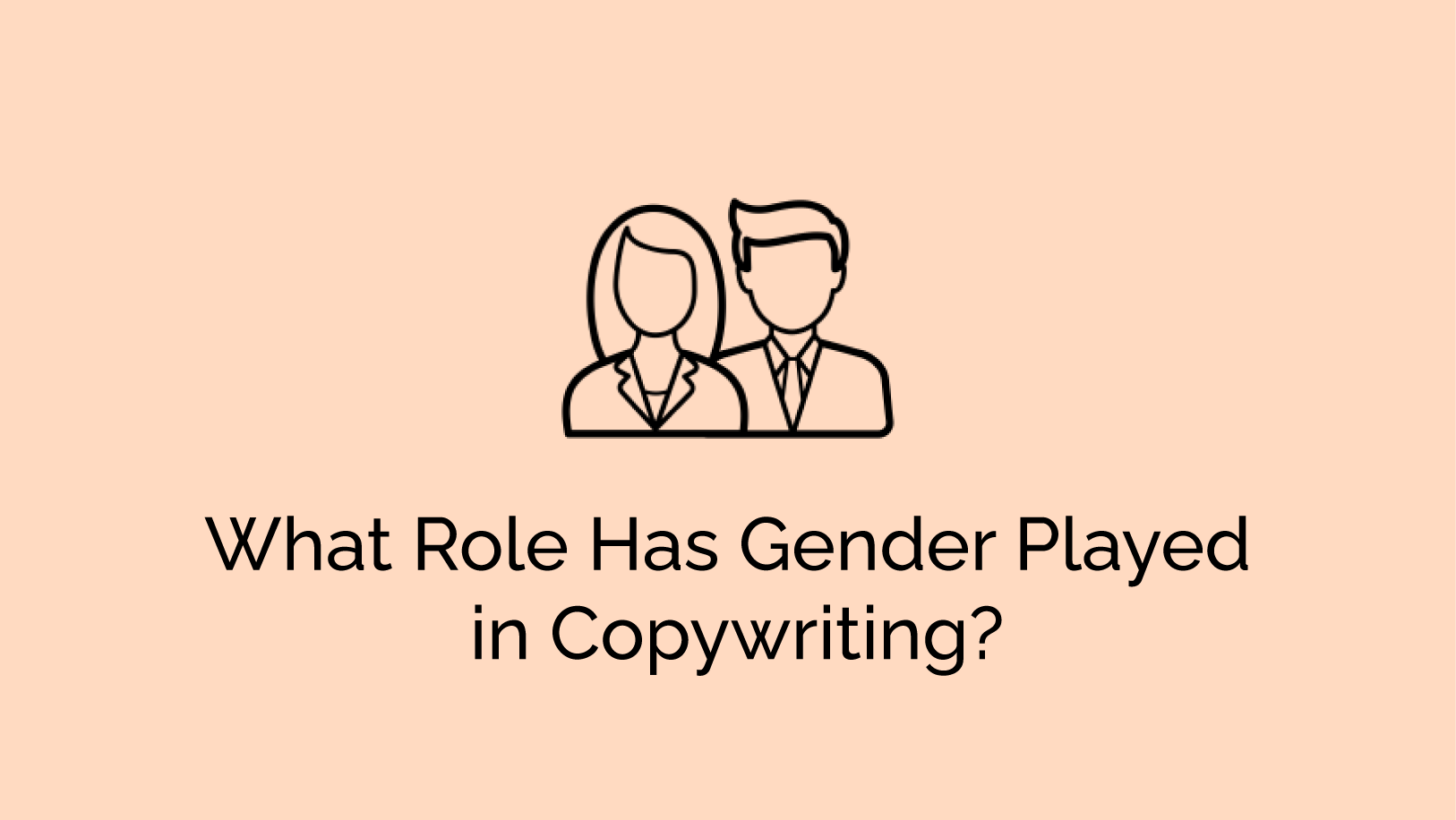 These are age old questions when it comes to, well, just about any profession. Will you earn less according to gender? Is it a deciding factor if there’s a promotion on the line? Can a woman do the job as well as a man (or vice versa)? What role has gender played in copywriting?

It’s no secret that copywriting is traditionally a male realm. In 2018, an article listing the “Top 20 Copywriters that make the most money” was published and only two women made the list. The highest ranked of those was only at #6 (for interest sake, the other slotted in at #20). Additionally, mention of only two women is made in the 2016 article, “Who are the best copywriters of all time”, – a miserly 20%. Based on these somewhat recent articles alone, you have to assume that men are still the major players in the profession. Or are they?

The wonderful thing about copy and writing is that words actually know no gender. Unless you know the writer of any given piece, you can only presume who is actually doing the writing. From as far back as the mid-1800’s, women have used male pseudonyms in order to promote their work further and gain recognition. British author, George Eliot, author of “Silas Marner” (1861) and the classic, “Middlemarch” (1871), was actually Marian Evans. More recently, Americans Meg Howley and Christina Lynch chose the pseudonym Magnus Flyte to write two novels before switching back to their birth names. Prolific author Nora Roberts (itself a pen name) used the androgynous J.D. Robb to promote her romantic suspense “In Death” series in 1995.

In copywriting, the same seems true. James Chartrand, owner of the well-known Men with Pens copywriting and web design company, “came out” as a woman in a 2009 blog post after working and blogging as a man for over two years. “Taking a man’s name opened up a new world. It helped me earn double and triple the income of my true name, with the same work and service…Did I quit promoting my own name? Hell yeah.”.

It is highly likely that many similar examples exist in Copywriting circles. The beauty is that we will probably never know unless the writers themselves want us to. Do you actually know who is responsible for the copy you are reading? And without knowing, does it actually matter?

In 2016, a mere five years ago, the Professional Copywriters’ Network carried out a survey on 610 UK-based copywriters, finding that an average 28% gender pay gap existed within the industry. Certain industry statistics from the survey statistics interesting, to say the least:-

Chegg Study recently investigated gender-based discrepancies, stating that, in the US, “studies have verified that the base salaries for both women and men in this occupation were each at least approximately normally distributed.” Seemingly gender bias is not as prevalent as it once was.

The 3% Movement states that, in 2014, only 3% of creative directors were female, but that an exponential increase has occurred since then, with the figure now standing at 29%. Once again, although there is hardly parity yet, the gender gap is narrowing.

A recent assessment of the genders using ContentBot shows that approximately 70% of users are men. Obviously these aren’t all copywriters but the figure bears an uncanny similarity to the 71% male representation indicated by The 3% Movement. Perhaps if female users of technology provide more user feedback to companies whose products they utilise, these gender-based differences would lessen.

While gender disparities continue to rapidly diminish, a latent attitude encouraging gender bias within the copywriting fraternity remains. Female freelancers still charge less, on average, than their male counterparts for the same work. Due to past biases, do they potentially believe that work won’t be readily available otherwise? With reference to current indicators it might, but women are establishing themselves and gaining more respect in the industry every day. Thankfully it seems that the chauvinism of decades-past is diminishing along with the fear factor mentioned above.

While gender bias has played a major part in the history of copywriting, current trends indicate that it isn’t much of a factor anymore. Copywriting is now, generally, as it should be. Whether it is a man or woman writing, the actual words in the copy are now doing the talking.

2 thoughts on “What Role Has Gender Played in Copywriting?”