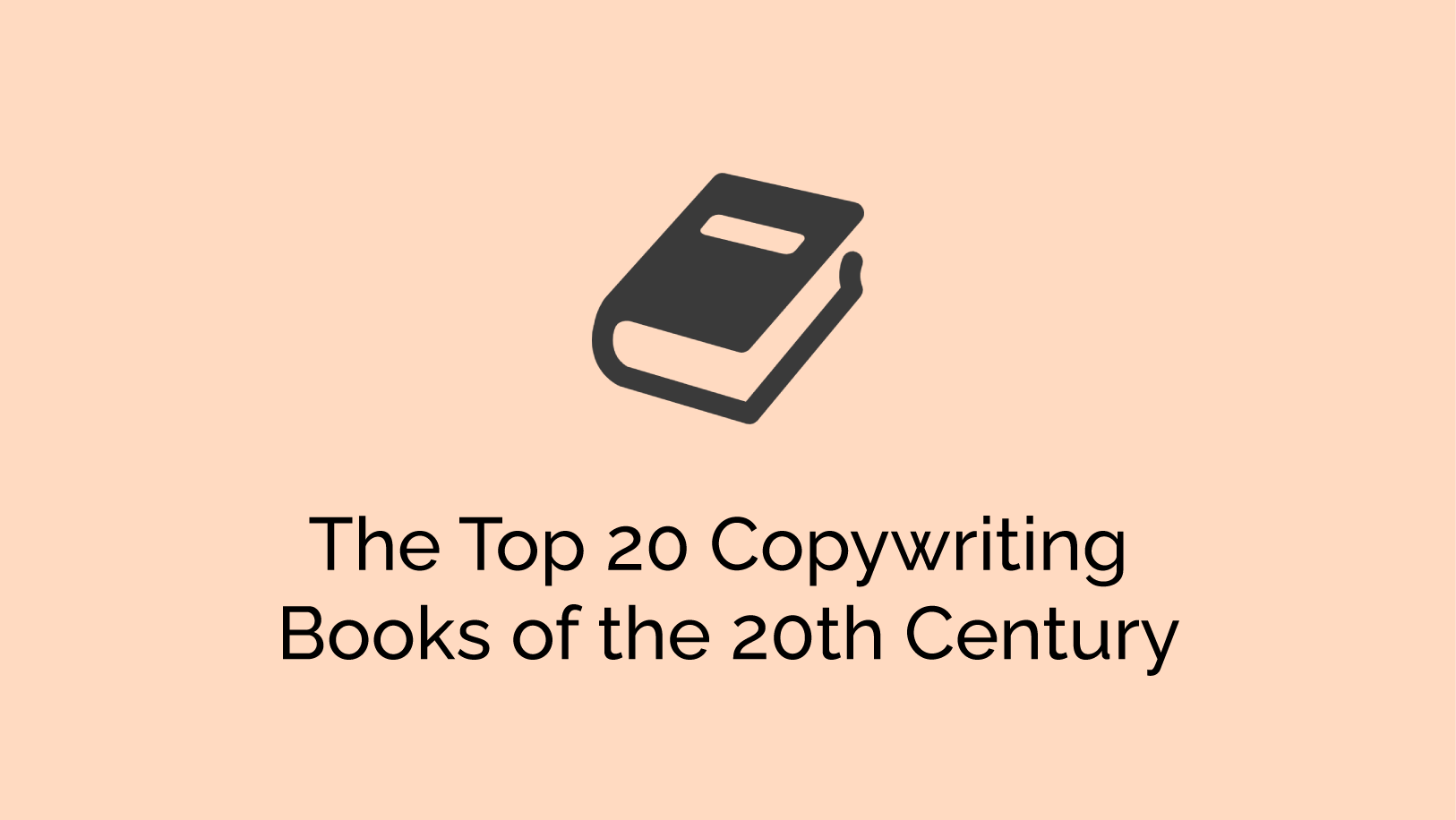 We’ve visited a number of online bookstores and allocated their “star ratings” to over 100 books tied in some way to copywriting. After totalling these ratings, we’ve compiled this list of The Top 20 Copywriting Books of the 20th Century:-

“This is definitely not a book for beginners because its packed with lots of advanced concepts; if there was a college curriculum on copywriting, this would certainly be a 300 or 400 level course. If you are already familiar with direct selling, human psychology, and the structure of a sales conversation, you’ll find this book a highly valuable resource! In particular, I’m seeing how I can use these concepts for catalog copy on eCommerce sites and social media ads.

Plus, its packed with examples and breakdowns which also makes it a valuable swipe resource.” – Paul Sokol (on Amazon)

“As far as I can see, there hasn’t been a new edition since 1987, although it was reprinted several times. This of course makes some of it out of date. No internet, no social media, no mobile ads or apps, no ‘content’. It’s also focused on advertising – above the line agencies producing commercials, press ads and posters.

That doesn’t mean that it’s all out of date, however. Much of it is still relevant. Other parts should be relevant, but have been forgotten in the rush to produce ever more content for ever more media ever more quickly – of a quality that’s often ever less.” – Peter (ideaswise.com)

“In this book, which has been a “bible” of the direct marketing industry for a quarter of a century, Mr. Stone gives a survey of the full range of direct marketing, from direct mail to the internet. The book is academically oriented. It is probably used as a textbook in many college classes on direct marketing. This can make it challenging to read.

It is also very practical, reflecting the experience of Mr. Stone and the other experts who have contributed to the book. Mr. Stone’s approach to creating the book was to recruit an expert in the various areas of direct marketing to explain how it works.” – Michael C. Gray

“Collier explained that, in order to write successful advertising, the writer must enter a conversation already going on in the reader’s mind. He said that a successful sales letter should read like a letter written to your best friend about an exciting discovery you have made that he or she should benefit from, too.

When the book went out of print, some students of advertising, including me, paid exorbitant sums to get their hands on this invaluable material. Now the Collier family is republishing this treasured volume in softbound and hardbound editions at very reasonable prices.” – Michael C. Gray

“It’s not often someone writes a book on marketing that turns out to be even more relevant more than a decade after it was published. “Permission Marketing” by Seth Godin is such an exception.

In light of the explosion of the inbound methodology the last few years, Permission Marketing is more relevant right now than ever before. – Ryan Scott

“Reeves firmly believed that the purpose of advertising was to sell, a lesson that most advertising people seem to have forgotten. He came out with the popular term – Unique Selling Proposition (USP) – and argued that the job of any advertising was to amplify the USP in as dramatic a manner as possible. The caveat – the brand had to deliver on the USP. He was disdainful of ads that were funny or clever for the sake of it. He was also wary of image advertising and felt that his claim-based advertising would deliver better sales. He was also an opponent of frequent changes in ads.

“The Art and Craft of Feature Writing is based on a brown bag guide that Blundell, formerly an editor at The Wall Street Journal, wrote for the acclaimed paper’s award-winning feature writers. If you’re not a reporter or journalist, you may wonder about the book’s relevance to you.

Rest assured. Copywriters, bloggers and writers of all stripes will love – and benefit from – Blundell’s tough love. You’ll want to apply this book’s clarifying, narrative-strengthening, time-saving methodologies to just about everything you write.” – Lorraine Thompson

“Hopkins covers the vital importance of testing everything you do. What is working? What do customers prefer? You’ll never know until you test.

The author also reminds us that we need to track the results of our advertising and campaigns. Shotgun blast broad mass media isn’t effective. We need to target our specific customer by only serving our message up to them and writing the headline and ad such that it speaks to them alone.” – Joe Rawlinson

“Good copy engages the reader, builds interest in the product, and tells the prospect exactly how to take action. In this book, you’ll learn how to write attention-grabbing headlines, tell engaging stories that highlight the benefits of your product, build trust through the use of testimonials and guarantees, ultimately resulting in a successful sale.

Whether you’re creating a sales letter, a pay-per-click search engine ad, or a web page, The Copywriter’s Handbook will help you write copy that builds your business.” – personalmba.com

“An interesting look inside the minds of 5 of the greatest copywriters of all time. It helps to know that they fear the same thing as the rest of us – that the next time they go to write an ad, the ideas just won’t come. While most of them agree that knowing your product inside and out, finding the inherent truth or drama of the product and being an avid consumer of culture (books, movies, travel, etc.) are important, when it comes right down to it, even the greats agree there’s no formula that exists for how to write a good ad. You simply have to work hard at it, look at it from different angles and figure out what’s going to grab the consumer’s attention. All in a day’s work.” – Vowen (on GoodReads)

“I thought it might be an ordinary autobiography, containing one or two nuggets of wisdom from one of the titans of Madison Avenue. I was mistaken.

The autobiographical aspect of the Confessions is merely a backdrop used to communicate lessons in leadership, client acquisition, client management, copywriting, and advertising – among other things. Confessions doesn’t concern itself with the abstract. Nearly every single paragraph is used to dispense some practical truth or piece of advice. It is, in short, a practical guide to advertising.” – Jon Persson

The eventual goal of writing effective copy (or Copywriting) is “To cause a person to exchange his or her hard-earned money for a product or service”.” – Ashwin K.S.

“The art of writing effective sales letters isn’t typically taught as part of a business school education. (I didn’t even know what they were until just a few years ago.) Dan Kennedy, who has written hundreds of sales letters for fees of $5,000 plus royalties, has shared his step-by-step system in “The Ultimate Sales Letter”.

According to Dan Kennedy, his approach to writing sales letters is to avoid being an “unwelcome pest” the prospective customer wants to get rid of and to become a “welcome guest” who can help the customer solve his or her problems.” – Michael C. Gray

“Hopkins didn’t believe in beautiful language, or humour, writing “People do not buy from clowns”. He was, when all is said and done, a salesman. Again and again the book shows his obsession with distribution, with getting the products into stores and into customers’ hands – and with creating advertising that facilitated those things as cost-effectively as possible.

It also shows a darker side. Work was Hopkins’ life. He came from serious poverty, from deeply religious parents and from tough Scottish stock and he equated play, relaxation, and leisure with laziness, indolence and sloth. Tellingly, he writes at one point “Amusement is transient”. I’ll say…” – The Agency Review

“Ogilvy on Advertising” is the textbook on advertising. It covers everything from how to get a job in advertising, to running an ad agency, to advertising in foreign markets and what the future holds in advertising. I don’t know where to begin a review of this. The best element in this book is the extensive use of full-color examples. I love this. And even better Ogilvy goes further by explaining why each worked or didn’t. It’s a beautifully done book even though it is somewhat overwhelming.” – Stoney G deGeyter

Grateful readers of “On Writing Well” will recognize Zinsser’s voice: “I learned to delete every word or phrase or sentence that told readers something they had already been enabled to know or were bright enough to deduce. I also tried to stop using phrases like of course and adverbs like surprisingly, predictably, understandably and ironically. …” The message of “On Writing Well,” he concludes, is “simplify your language and thereby find your humanity.” – Elsa Dixler

“More proof that the Internet is no substitute for real books, whether they be in printed or electronic form. This is an old book, but it relates to human nature which hasn’t changed for thousands of years. I had performed many searches on-line looking for information about the subject matter in this book, but there is nothing as comprehensive, in-depth, or well written.

It is an excellent book and the proof of the pudding was that after learning certain things and changing the wording on advertisements on my own website I saw an immediate jump in CTR.” – Phil.UK.Net (Amazon Review)

“This guide is chock-full of examples and how-to advice for anyone venturing into the world of advertising. You may not be going to work for Ogilvy & Mather, but everybody is involved with marketing in some capacity. Whether you’re selling a product, an idea, or yourself, knowing how to communicate persuasively using text, images, video and digital media is what this book is all about.” – Tyler DeVries

These classic strategies that started as direct mail advertisements are now the same strategies that, with minor adjustments, are successfully used for internet web pages. Technology may change, but the psychology of people, including their common wants and desires, don’t change very much.” – Michael C. Gray

“You can expect Breakthrough Advertising to:

The value of the book is mostly in the sections on understanding markets, and understanding the psychology of selling and buying — or, in communicating convincingly and effectively.” – Jameson Zimmer

The Top 20 Copywriting Books of the 20th Century will always be subjective. Everybody will have their own opinions. What cannot be denied is that our list is full of knowledgeable authors sharing their craft, and hopefully these books will continue to enlighten audiences for years to come.

Also check out The Top 20 Copywriting Books of the New Millennium.